The Battle of Love and Power

What’s this play about?

Shakespeare wrote to entertain. But that was 400 years ago.             Becoming ‘the greatest writer who ever lived’ hasn’t necessarily helped him get across to us today. It makes us nervous in case we don’t like him.

Tonight forget any such feelings if you have them. We bring you a daisy chain of five of his stories about things that matter to us now as much as they did then. (And if you’re someone who already knows and likes Shakespeare, we’ve got a few surprises for you too.) But what we’re calling ‘stories’ are not ‘Shakespeare lite’ – they’re authentic excerpts with immediate appeal.

Triggering us into each of the scenes is an argument between two actor friends, Don and Sal. Sal says Shakespeare’s all about love. Don says no, he’s all about violence and power. Each of the stories shows the       relationship of love and power in a different way.

Other things happen between the stories. The handyman who comes to move the props joins in the discussion. And any one of the three of them might suddenly find themselves becoming a character in one of the scenes.

Sal and Don conjure up each story in turn by their argument, but if you want to know the trail, here’s a brief route-map:

Don says this story shows that love is an illusion. Sal replies by telling him to look at

5a. HENRY VI, with its story of the secret passion between Suffolk and Margaret. This story is interrupted by

THE INTERVAL after which

5b. The excerpt from HENRY VI continues.

Sal and Don’s discussion of that is hijacked by Handy, asking awkward questions which lead to a strange intervention by:

Don says this proves that love can be a bond of evil as much as good.

Sal has only started to reply when they - and Handy- are interrupted by:

Finally Don and Sal come to a kind of agreement by bringing together: 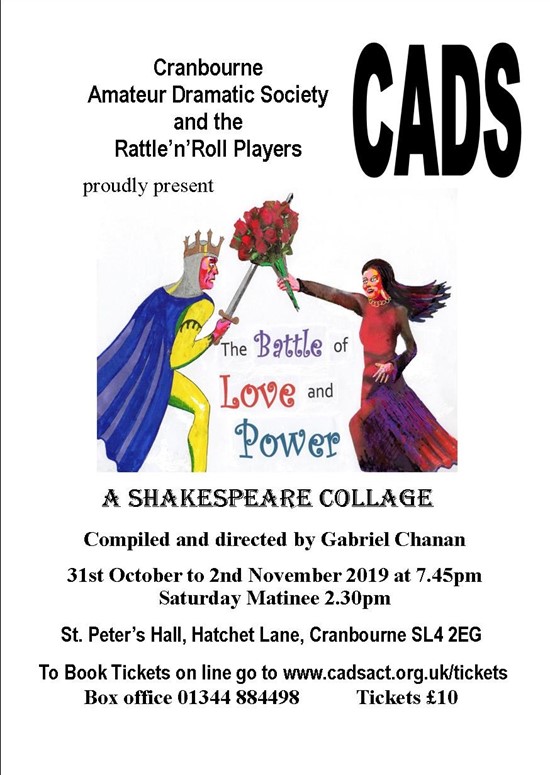